Wollemia nobilis (Wollemi pine) has been dubbed a 'living fossil' as it represents the only remaining member of an ancient genus dating back to the time of the dinosaurs, over 65 million years ago. This fascinating tree was only discovered in 1994, causing great excitement in the botanical and horticultural worlds. 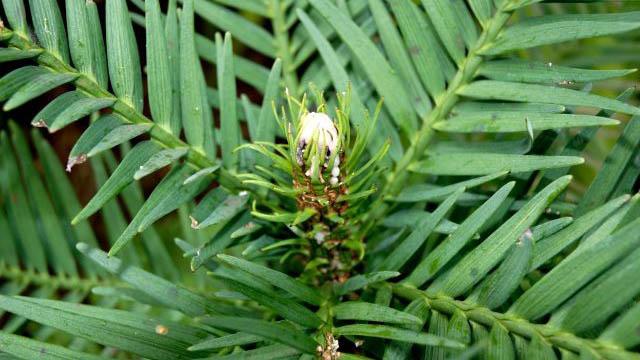 Wollemia nobilis (Wollemi pine) has been dubbed a 'living fossil' as it represents the only remaining member of an ancient genus dating back to the time of the dinosaurs, over 65 million years ago. This fascinating tree was only discovered in 1994, causing great excitement in the botanical and horticultural worlds.

Wollemia nobilis is a tall tree with a slender crown, and mature individuals often have many trunks that emerge from the base with some consisting of up to 100 stems of differing sizes. The bark has a bumpy surface due to numerous spongy nodules covering the trunk of older trees. As the leaves mature, they develop from bright lime-green to a more yellowish-green. Both male and female cones are borne on each tree, with female ones on higher branches; the narrow male cones are reddish-brown in colour, whilst female cones are more rounded and mature from green to brown. The small brown seeds that are produced are thin and papery, with a wing around the edge aiding wind-dispersal.

Wollemi pines reproduce both sexually, through wind-pollination, and vegetatively, resulting in numerous trunks arising on a single tree. It may be that only the oldest trunks are able to produce seeds; female cones are observed year-round but male cones mature in late September and early October, releasing their pollen over the next few months. Seedlings appear to be slow-growing and mature trees are extremely long-lived; some of the older individuals today are estimated to be between 500 and 1,000 years old.

The remaining population of Wollemi pines may represent a relic of the previous extent of this species; it is thought that these trees may have been undergoing a slow natural decline for thousands of years. The species is today threatened by the small size and limited range of its population, which is intrinsically at risk from any chance event that may occur, such as fire or the spread of disease.

The Wollemi pine is protected in Australia and the population is located within the Wollemi National Park, where this fragile population is managed to ensure the species remains viable in the long-term. Such a fascinating tree may have much to reveal about ancient species that were previously known only from fossils. Its discovery underlines the vital role that habitat conservation has to play in the preservation of biodiversity.

Wollemia nobilis is being monitored as part of the IUCN Sampled Red List Index for Plants, which aims to produce conservation assessments for a representative sample of the world's plant species. This information will then be used to monitor trends in extinction risk and help focus conservation efforts where they are needed most.

The Wollemi pine was propagated vegetatively from a limited stock of seeds taken from the wild in New South Wales, Australia, and then released for sale world-wide. It is now available from and grown on commercial nurseries and garden centres.

The Wollemi pine - a blast from the past!

The Wollemi National Park on the edges of the Blue Mountains in Australia has always been a popular destination for hikers and climbers who enjoy tackling the plunging sandstone gorges. It lies 12 kilometres northwest of Sydney but remains surprisingly cut off from the modern world. But even so David Noble, a field officer of the park who was abseiling the canyons, was intrigued one afternoon to find a tree he had never seen before. He broke off a twig and took it back to show botanical friends, but they were confused by what they saw. Was it perhaps a species known elsewhere in the world, accidentally introduced to the national park? The team needed to go back with a helicopter to collect seed cones, before a senior botanist at the Royal Botanic Gardens, Sydney, agreed that the tree was a new species of a kind thought to have been extinct for millions of years.

The Wollemi pine hit the headlines because it was marketed as a 'dinosaur tree', a relic from the long-distant past that had managed to survive. Quickly, the Australian authorities devised a plan to propagate trees for sale in order to fund the care of the hundred or so trees remaining in the wild. The trees have very little genetic variability so the small population left in the wild is easily threatened; at present there is a serious threat from a Phytophthora water-mould which would cause dieback if it attacked the trees. For both fund-raising reasons and in order to widen the distribution of the Wollemi pines, saplings have been sent all over the world. Kew grows several specimens, of which one, on the Orangery lawn, is growing in a cage to symbolise how precious it is.

The Wollemi pine's nearest living relatives are the kauris and monkey puzzle trees in the Araucariaceae, but fossils that look similar to Wollemia occur elsewhere in Australia, New Zealand and Antarctica. For this reason, it is sometimes referred to as a 'Lazarus taxon' - a group of organisms that was thought to have become extinct, but which turns out to have a few members surviving. (They are called 'Lazarus' after the man in the Bible whom Jesus brings back from the dead.) Another conifer example of this at Kew is Metasequoia glyptostroboides , the dawn redwood, which is the only living member of its genus. It was discovered in the 1940s growing in China, having also previously been known only from fossils. There are quite a few conifers of this kind that could be called 'living fossils'.

Trees similar to the Wollemi pine and the dawn redwood would have covered a great deal of the earth's surface during dinosaur times. Both are conifers, and many of conifers reproduce by making seeds protected by woody cones. Conifers were a very successful group of plants until the angiosperms, or flowering plants, came along; but the flowering plants had the ability to use insects and other animals as pollinators, giving them a big advantage in the struggle for survival. Today, there are only about 600 species of conifers left in the world, the remainder of a once world-ruling class of plants. Many of them grow in wild, remote and rocky places which do not suit the angiosperms; perhaps there are more 'living fossil' species out there in the world's remaining wildernesses for future Kew scientists to discover.

The oldest living Wollemi pine is known as 'King Billy', who may be over 1000 years old.

Wollemi pine was propagated vegetatively from a limited stock of seeds taken from the wild in Queensland, Australia, and then released for sale world-wide. It is now available from, and grown in, commercial nurseries and garden centres.

In 2005, plants brought from Australia were subjected to a hardiness trial at Kew. They were grown in soils with differing pH values. The group that was started off in the most acidic soil (pH 4.7) had grown the best as of 2011, with a change in height from 30 cm to 300 cm. Ideal conditions include shallow, acidic, free-draining soil on sandstone with plenty of organic matter but low nutrient levels. Plants should receive plenty of water during the growing season. Many of the plants grown at Kew have produced male cones; one has produced female cones. The plants have proved to be very hardy, withstanding temperatures down to -10°C.

Ideally, Wollemi pine should be grown in 50% shade, with protection from the wind and sun. It is suitable for north-facing gardens and shaded conservatories. Plants placed in full sun initially exhibit yellow colouring, but they gradually return to green again after about six months.

Wollemi pine can be seen growing in a cage (to symbolise how precious it is) on the lawn in front of the Orangery at Kew Gardens, and in the Southern Hemisphere Garden at Wakehurst.

Wollemia nobilis was one of 12 star plants featured in the Landscape, which took you on a journey across a whole continent, from eastern Australia's coastal habitat, through the arid red centre, to the western Australian granite outcrop featuring unique and highly endangered plants.

Conservation
Wollemia nobilis is rated as Critically Endangered (CR) according to IUCN Red List criteria and has received a EDGE score of 4.91, which places it in position 1 on the EDGE Gymnosperm list. It has a Evolutionary Distinctiveness of 139.59, ranked 3. More information on the EDGE Gymnosperm project here https://www.edgeofexistence.org.

Use
Since it was rediscovered, Wollemia nobilis has become a prized ornamental subject. 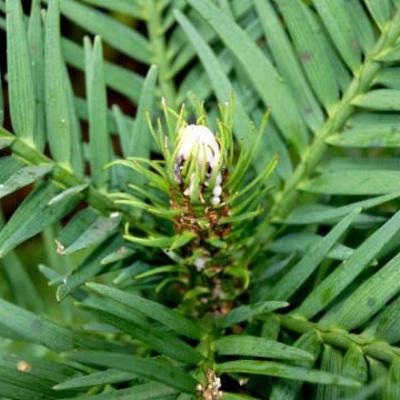 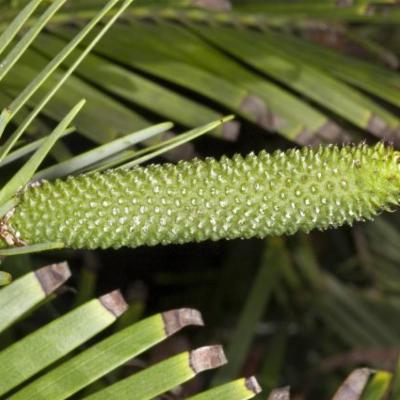 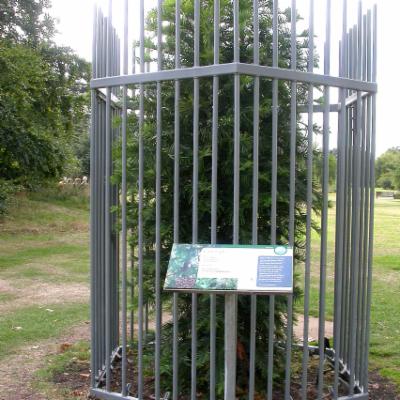 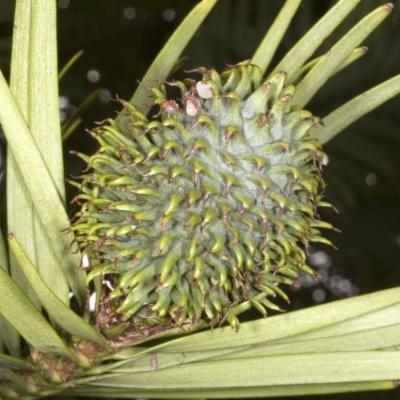 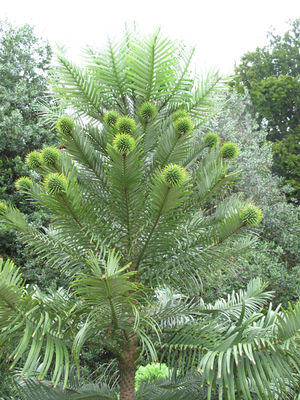 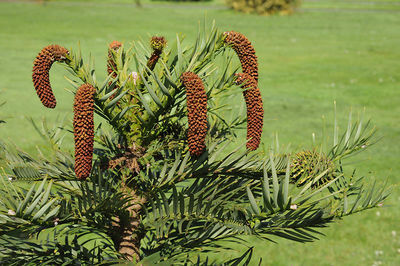 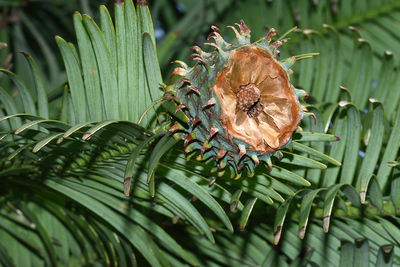 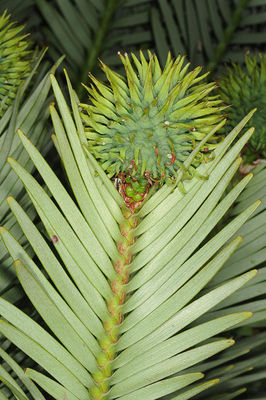 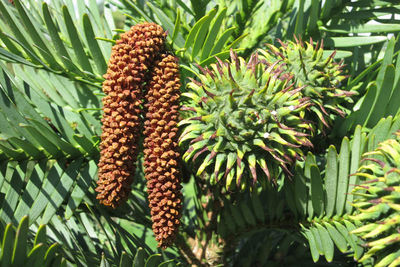 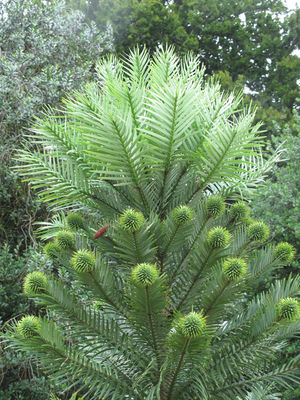 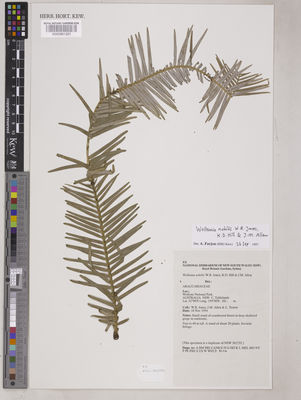